There were celebrations at the Antrim All Stars Boccia Club recently when Caroline Millar received the prestigious SportMaker Disability Coach of the Year award.

The former Boccia player turned talented coach was surprised by a Sport NI film crew who captured the moment Caroline was told of her win during a training session with her squad.

Sport NI’s annual awards recognise the unsung sporting heroes who help make sport happen and gives the sporting community the opportunity to showcase their achievements and give special thanks to coaches, officials and volunteers who work tirelessly behind the scenes. There are 12 award categories recognising achievement at all levels of sports participation, from grassroots through to high performance.

SportMaker judges were impressed with how Caroline had engaged club members during the tough times of Covid-19 and subsequently built the club back up, as well as her skills as an empathetic and encouraging coach. 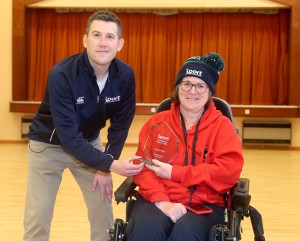 Speaking after her win Caroline said: “I love coaching.

“My motto is, improvise, adapt and overcome. We all work out as a very good team together.

She added: “During Covid I kept in touch with all the guys and we were doing silly competitions in the house. If they didn’t have Boccia balls I would get them to use rolled up socks. That was just to keep them going.

“The members of the Antrim All Stars really get something out of playing Boccia and it makes them happy and that gives me a buzz. 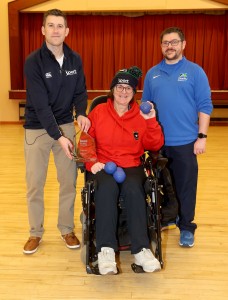 He said: “I nominated Caroline for the SportMaker award because of her involvement in Boccia over the last number of years. She has been involved as a coach at the club and at our Northern Ireland pathway squad level.

“What makes Caroline stand out as a coach is her experience as a player. After her playing career finished she decided to go into coaching and officiating. As a coach she has really excelled. She has completed her level 1 coaching award and is hoping to do her level 2 award later next year.”

He added: “I think Caroline having a disability herself means she really understands where the player is coming from, a lot of the barriers they’re going to face getting into sport and experiences they’re going to have coming through the sport. I think she’s really well positioned to manage those expectations.

“Her all-round knowledge not just the sporting knowledge makes her a really good coach.

“Just the way she works with players is really inspirational, I think she really develops players coming from all sorts of levels of the sport.” 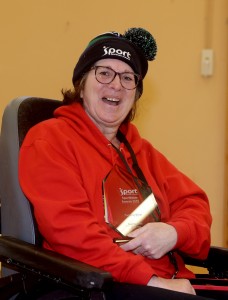 Congratulating Caroline on her award Antoinette McKeown, Sport NI Chief Executive, said: “Our SportMaker Awards celebrate the coaches, officials and volunteers who go that extra mile for their club members and their sport.

“Caroline is such an inspirational example of this. During the challenging times of Covid-19 she was imaginative in keeping her fellow club members interested and channelled her energy in building her club back better after lockdowns ended.

“Caroline generously shares her wealth of experience and skills as a former Boccia player to help up and coming players reach their full potential.

“She is a worthy SportMaker winner.”