Sport Key to Mother’s Fightback from Near Death Illness 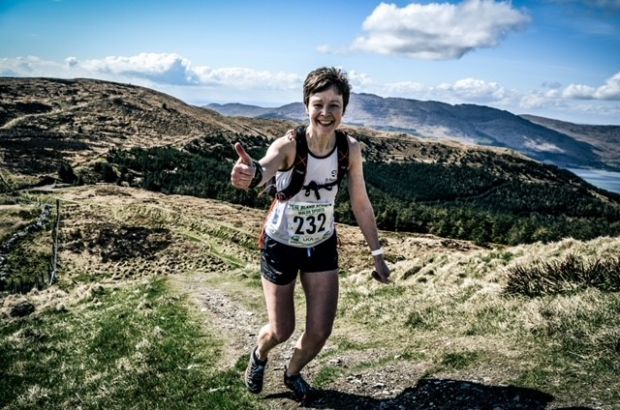 A mother who was just hours from death says her love of sport was vital to her remarkable physical and mental recovery. Joanne McCauley was told by doctors that if she hadn’t turned up at hospital when she did the large abscess, she didn’t know she had, would have burst, poisoning her, and endangering her life. “My husband was told if I had gone home and lay down on the sofa I would not have woken up. The abscess would have burst, and I could have been dead by the time he’d returned from work,” explained Joanne. “One of the doctors described me as a walking corpse.” The Portadown woman had been feeling unwell for months leading up to the near-death experience but despite numerous GP and hospital visits doctors were unable to pinpoint the source of her illness. “I was the colour of death and lost a lot of weight in the weeks coming up to that. On May 13, 2009, I went from a million miles an hour to zero. “That date is etched on my brain, and I remember it so clearly.” 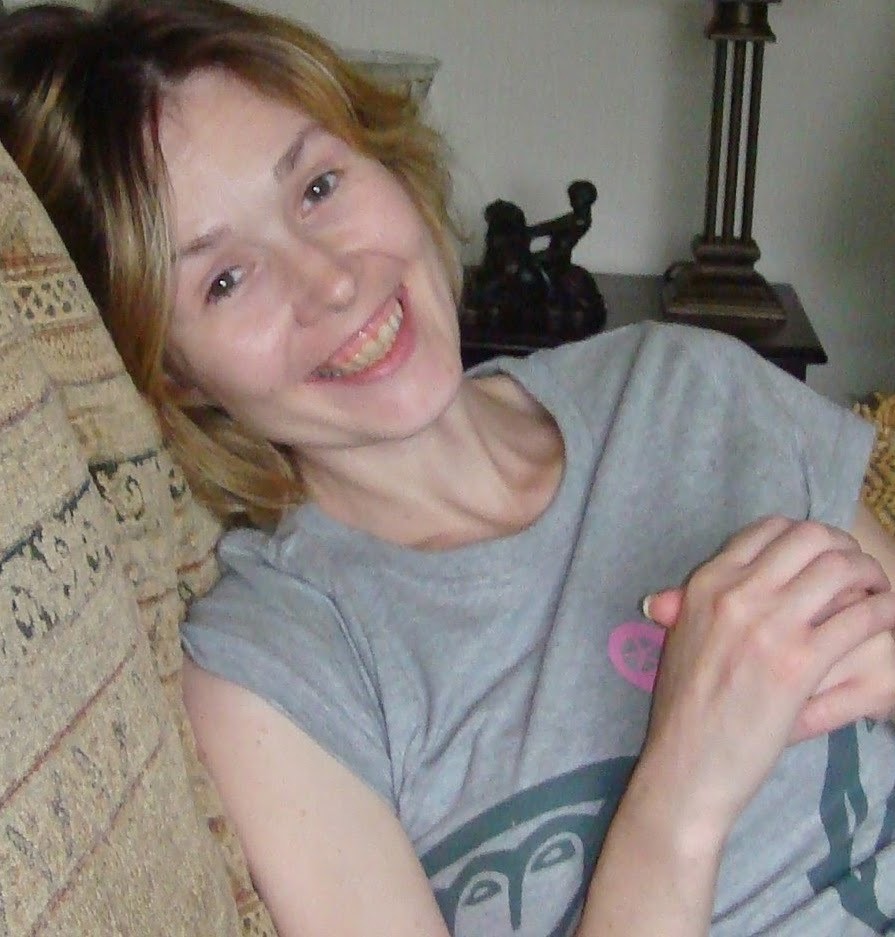 Joanne McCauley pictured in July 2009 as she recovered from the emergency surgery that saved her life.

The mother-of-two had an undetected perforation of the bowel and it had been slowly leaking through her body subsequently causing infection, the appendix to implode, and a litre abscess to develop. “Minutes after being admitted to the ward my stomach started to rise like a balloon, I was so weak and I was immediately rushed into emergency surgery, taking six and a half hours,” she said. Joanne says she’ll never forget the surgeon telling her the next day, “my dear, you were a mess”. It would be another couple of months, and many lengthy hospital stays before doctors discovered that Joanne had Crohn’s disease – a lifelong condition where parts of the digestive system become inflamed. She explained: “Being undiagnosed for so long caused a lot of complications and included having a temporary stoma bag to rest the bowel. At one point they thought it might be bowel cancer which was frightening. I spent a year in and out of hospital not really getting that much better and having setbacks,” she said. Going from being a busy mum who had been an avid hockey player most of her life to lying in a hospital bed with little strength to walk was tough mentally admits Joanne. “There were days when I felt sorry for myself asking, ‘Why me?’ What did I do wrong?’ But I had great support from family and friends.” Despite that support Joanne still experienced loneliness as she dealt with the physical and mental effects of her ill health. The Co Armagh woman, now 48, has decided to team up with Sport NI to share her story to mark Mental Health Awareness Week (May, 9-15) that is highlighting the impact of loneliness, in a bid to help others. “I lived for visiting hours,” she explained. “There was one day in hospital when no-one was able to visit me, and I just felt so lonely and just sat and cried. Being ill can be very lonely, as people are at work and have their own lives to get on with, so you are left alone during the day just with your own thoughts, wondering whether you are ever going to get better. At home when you are immobile you appreciate company or even a phone call. 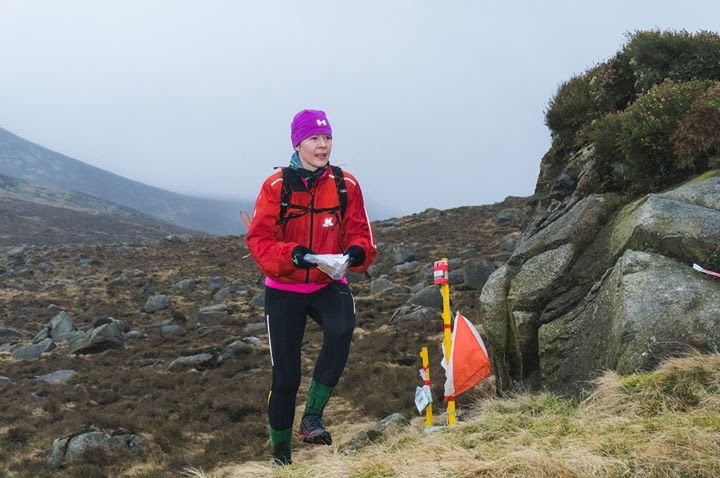 Joanne McCauley, who is a member of Lagan Valley Orienteers, taking part in orienteering.

“Mentally I had some dark days and I hated relying on other people as I wasn’t used to that. At the very start when my independence wasn’t there, I had to take baby steps. When I got home, I set myself little targets like to walk to the top of the hill near my house and then to walk to the bus stop, just to get out to build strength and see other people.” She added: “I think a base line of fitness especially if you do get ill really helps with your recovery. Sport has always been a big part of my life. “Hockey had always been my release and I loved the social element. “For that hour when playing hockey, it was my time and I grew-up playing with those girls – they really were my hockey family.” Joanne’s ‘hockey family’ rallied around her and with their encouragement she passed on her experience from the sidelines to the younger generations of Portadown hockey players coming through the ranks. She describes her love of sport as a “lifeline” during these difficult months. “That gave me something to look forward to every day. It was the power of getting out there,” she said. Determined to regain her independence and fitness it was an invitation to join a local Parkrun in 2013 that saw Joanne catching the ‘running bug’. “The Parkrun got me started and I walked and jogged round it. Then I was the ‘mummy taxi’ for the kids when they went to St Peter’s Athletics Club (AC) in Lurgan. One day someone said, ‘Why don’t you come and join us?’ and I did. It is a great community to be part of. Orienteering was also a community I joined with the kids and continue to enjoy today,” she said. 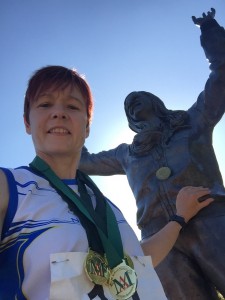 Joanne pictured with some of her athletic medals at the Mary Peter’s statue at the Belfast track named after the gold medal Olympian.

Joanne discovered a talent and passion for the track that was nurtured by Athletics NI and Newry AC. And as she regained her physical and mental health, she rose through the ranks to be placed in local, national and then European competition. When Joanne crossed the finishing line in Venice to achieve a top ten placing in the European Masters Athletics Championships for her age group in late 2019, she savoured just how far she had come. “It’s been quite a journey,” she said. Appealing to mothers Joanne added: “Please do not forget about yourself. Your physical and mental health are as one. “I see a lot of women not looking after their physical and mental health. They are last on their list as they are so busy looking after their families and working. “What I would say is, ‘You do have time’. You don’t have to compete at a high level but just even take a walk for 30 minutes, go for a swim, go to the gym, use your local leisure facilities, take the kids with you to Parkrun – just get out there. 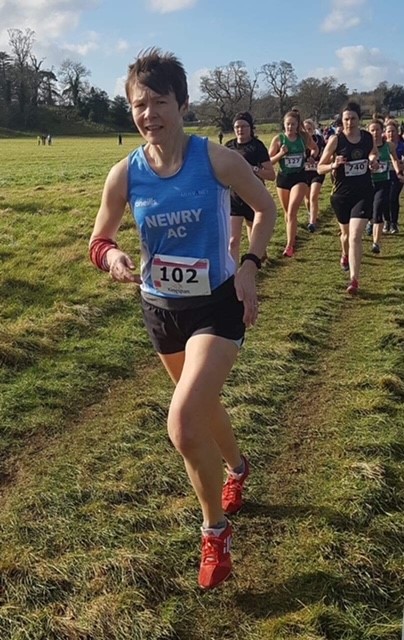 “Sport and physical activity play a big part in your mental and physical health. Sport has been my lifeline to recovery.” Sport NI Chief Executive, Antoinette McKeown, echoed the sportswoman’s call. “Joanne is such a fantastic example of the power of sport in action. Sharing her story on how sport has been key to her recovery provides inspiration to others who may be struggling with their physical and, or mental health,” she said. “That is why Sport NI has made getting more people physically active a main priority within our Power of Sport five-year plan. We know just how much it can enrich people’s lives and benefit their overall well-being. “I wholeheartedly join Joanne’s call this Mental Health Awareness Week for people to get active and reap the benefits of being involved in sport or physical activity for their mental and physical health.” Sport NI offers a range of resources and training courses to support members of sporting clubs, associations and teams with their mental health and wellbeing. For more information, please visit: http://www.sportni.net/mental-health-training-courses/