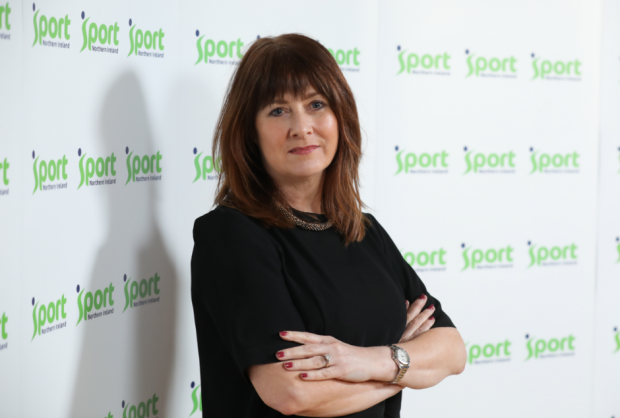 Eleven footballers, who had just turned professional three months before, gave their all as they lined up against the might of the best resources that the Women’s English Premier League could muster on Tuesday.

Disappointingly, none of this was a topic of conversation after such a historic night of sport in front of a sell-out crowd. Instead, a glimpse into a prevailing mindset, eclipsed the fact that this NI Women’s International team is the most successful NI team dominated the headlines that the team had earned.

Much has been said since about Kenny Shiels’ post-match remarks. For me, it was not clumsy use of language, this was a candid view, expressed and expanded upon. Tellingly, his words reveal a mindset that belongs to a bygone era but is still all too prevalent in sports here today towards women at all levels, in all sports. Of course, it is not only present in sport. Comments that feed and fuel worn-out stereotypes of the ‘emotional woman’ still prevail whether it be in business, politics, or many other walks of life. The irony is that women and girls encouraged to play sports for well-being and health, face the same barriers that we want to leave behind in our precious spare time.

The harsh reality is that unfortunately, the experience of women in sport being different to that of men isn’t a problem unique to football. We’ve had the recent report into how the Irish Women’s XV missed out on qualification to the Women’s Rugby World Cup 2021 and it’s not that long ago that senior women playing Gaelic games were overlooked in accessing facilities in favour of junior boys’ teams.

Gaelic games, football and rugby are among our most visible sports that have been at the vanguard of driving women’s participation. Welcome inroads have been made in that regard, but raw numbers and statistics can hide underlying attitudes. We know that even when women are represented in sport they are often not treated with respect.

But for me one of the most worrying questions that has emerged from this controversy is, ‘If this is how women are regarded at international level, how are they treated at their local club?’ Statistics show there is still a gap between woman and girls and men and boys on the pitch, on our sidelines and in our boardrooms. Women are less likely to have taken part in sport at least once within the last year, 55%, than men, 62%.

At post primary school level of those who never participated in sport outside school 45% were girls compared with 31% boys. This gap gets wider on our sidelines with women representing just 19.5% of the overall sports coaching workforce and this drops to just 10% for those who coach our World, Olympic or Paralympic athletes.

It’s not only mindsets that need changed but sporting structures – to tackle these inequalities head on. That’s why we have put inclusion for women and all other underrepresented groups at the heart of our five-year Power of Sport plan, so everyone can be enriched by the power of sport.

We are determined that current barriers are overcome, and more opportunities are created for women at all levels of sport. We have already created a Women in Sport Panel that draws on the experience of sportswomen from across the spectrum to ensure women’s voices are heard and to improve their sporting experiences. We have already invested £2.2m in Performance Sport in the last year that saw 42% of the results being delivered by women athletes. Half the recipients of our Athlete Award, that helps athletes financially to concentrate on their chosen sport, were women and through our Sporting Clubs Programme, we’ve awarded £1.8m to sports that in total have 40% female club membership.

If there is anything positive that can come of out of this controversy, then it is perhaps that we are now openly discussing the barriers that face women in sport and how we can tackle them. These are not easy issues to raise, particularly in a small region like Northern Ireland where relationships are all important. However, the views expressed by Manager Kenny Shiels are so stark that they cannot go unchallenged.

So, I would ask that if you are a member of a sporting club, ‘What are you doing to make it welcoming to women?’. Our governing bodies must take responsibility to give female players and other participants a voice and make that voice count.

Look around your boardroom table, are there womens’ voices? And are they valued?

Later this year, we will be leading a review into women’s experiences in sport in Northern Ireland.

As a female leader in sport, I have experienced the full gambit of a mindset that articulates a private members club for men where women enter at their invitation and permission, regardless of the position women hold.  And there is unity among women in sport in their solidarity with, and immense respect for the NI Women’steam. It is time for sports to free the voices of female players to express their own opinions and to seek basic equality and necessary improvements.