Sporting Organisations Told ‘Just Do It’ to Benefit From Crowdfunding 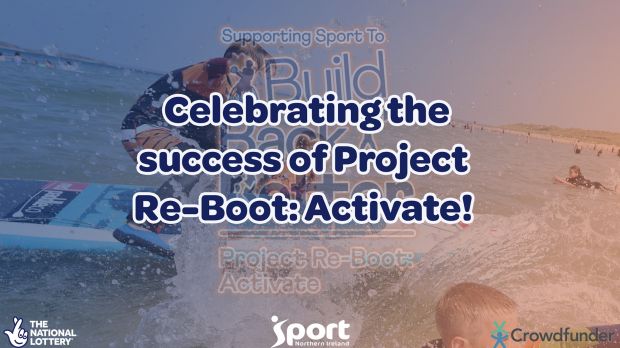 A sporting club that raised over £11,000 thanks to a Sport NI Crowdfunder project has encouraged other organisations to “just do it!”

The club’s call for others to apply comes as the latest stage of the scheme is launched, with a total of £400,000 of funding being made available. This recent release of funding means Sport NI will pledge 50% of an organisation’s Crowdfunder campaign total (or 60% for those in the greatest areas of social need and/or within a rural community), up to a maximum of £5,000.

The Ballinderry club raised over £6,000 from donations via their online Crowdfunder campaign and received the maximum £5,000 from Sport NI. The money helped fund specialist coaching to encourage new and existing young members to attend the club after lockdown, as well as helping train new coaches.

Killian Conlan, Ballinderry GAC youth officer, said: “For any clubs out there who are thinking about doing Sport NI’s Project Re-Boot: Activate, I would say ‘just get involved’.
“The staff are so helpful, and they really make it easy for you the whole way through.
“Just do it!”

To date Sport NI has awarded £150,000 to 37 successful grassroots sporting campaigns that in turn have raised a fantastic £240,000 in additional funding thanks to their incredible Crowdfunder supporters. Like Ballinderry Shamrocks GAC for many of those organisations it was their first time raising money by setting up a Crowdfunder campaign.

Killian explained: “Crowdfunder was something we hadn’t done before. What we found was once we did get started, we enjoyed it and it took on a life of its own and it just moved on from strength-to-strength.”
He added: “The project had more than financial benefits as it raised a lot of enthusiasm and a lot of awareness in the local community. It gave the local area a great boost.”

The deadline for applications for Project Re-Boot: Activate is March 20, 2023, if funding isn’t exhausted before. The project is part of Sport NI’s Build, Back, Better campaign that was launched to deliver funding to sporting clubs and organisations in the wake of COVID. It’s thanks to National Lottery players that Project Re-Boot:Activate is able to deliver its financial, community support.

Antoinette McKeown, Chief Executive of Sport NI, said: “I am delighted to see the launch of the latest stage of Project Re-Boot: Activate. This has been an incredibly successful project and partnership with Crowdfunder UK and The National Lottery.

“The benefits of this project haven’t just been financial– as it has helped grassroots sport build back better after the devastating impact of COVID. This project has reignited the community spirit that is at the heart of our sporting organisations by galvanising the support of new and existing members behind a common goal.”

She added: “It has also introduced, for the first time, many of our sporting organisations to the benefits of raising money via Crowdfunder as well as reaching and engaging with their ‘crowd’ online.

“I’m looking forward to seeing many more ‘crowds’ getting behind their local sporting campaigns and help sport build, back better.”

Check out whether your club or organisation qualifies for 60% Sport NI match funding by falling into the rural classification AND/OR having a NI multiple deprivation index of 222 or lower in the multiple deprivation index, both of which can be found by inserting your organisation’s postcode here
Find out more about Project Re-Boot: Activate here
Email projectreboot@sportni.net to apply or for further information.